‘When an American accountant approaches Melbourne woman Kimberly Leamy out of the blue and tells her he believes she is Sammy Went, a child who was abducted as a two-year old from her home in Manson, Kentucky, Kim believes this is a case of mistaken identity. But as she investigates her family, questions arise and she travels to Kentucky to find answers.’

1. Where did your ideas for ‘The Nowhere Child’ originate?
The central idea for the book came from an unlikely place – a heartbreaking conversation with my nan. She’s 98 years old and has aged dementia. On the Christmas before I started the book, she had mostly forgotten who I was and while I explained it to her, I began to wonder about how memory works – was my nan’s memory of me truly gone, or had she lost the ability to access it? After a little “research” (I can call it that now that I’m officially a writer, but at the time it was “procrastination”) I stumbled upon Decay Theory, a theory that suggests that if we don’t access a memory over a long enough period of time, there’s a chance that memory is still thumping around our head, we just can’t reach it anymore. This fascinated me, and I soon started to wonder about my own memories. Then in popped the thought: – what if the people you think are your parents are actually your kidnappers? There is, of course, no evidence of this, and the fact I had the thought at all speaks more about my own twisted brain and true crime obsession, but I knew it would make a great story.

2. How did the setting of Kentucky influence your novel?
For years, I’ve had a fascination with Pentecostal snake handlers – people who worship God by handling venomous snakes – and seeing as how most of the churches that practice this are in the American South, I knew I wanted to take the story to a small town deep into Kentucky. The setting had a huge effect on the story – not only was it a dark and interesting place for Kim to enter and explore, but it played into each of the central characters and created all sorts of interesting questions: what might it be like for a teenager in this small town, or a closeted gay man, or an African American sheriff, or someone who had lost their faith?

3. How has winning the Victorian Premier’s Literary Award for an Unpublished Manuscript helped you with your writing career?
Before the VPLAs, I was working casual jobs to support by ‘writing habit’, an addiction that simply wasn’t going away. I had finished a manuscript I thought was pretty good but had no real idea how to take the next step. Winning the VPLAs put me on the radar of all the best publishers the country and overnight, turned my addiction/hobby/dream into a reality. It changed my life in the best possible way, and I’d encourage anyone who is thinking about entering a writing competition to go ahead and take the leap.

5. Do you have any advice for people wanting to write a novel?
Write a lot, read a lot, and if you don’t own Stephen King’s On Writing, rush out and buy it. I’m serious. Do it right now. Don’t even finish reading this sentence! It’s an amazing read and provides you with everything you need to start, write and, most importantly, finish a novel.

6. What’s next for you?
A film I co-wrote called Relic is currently in production, and the screen rights to ‘The Nowhere Child’ have recently been sold. I’m keeping very busy, although my primary focus is finishing book two, a mystery/thriller about two strong women: the wife of a man who is killed, and the wife of the man accused of his murder. I can’t wait to share it with the world! 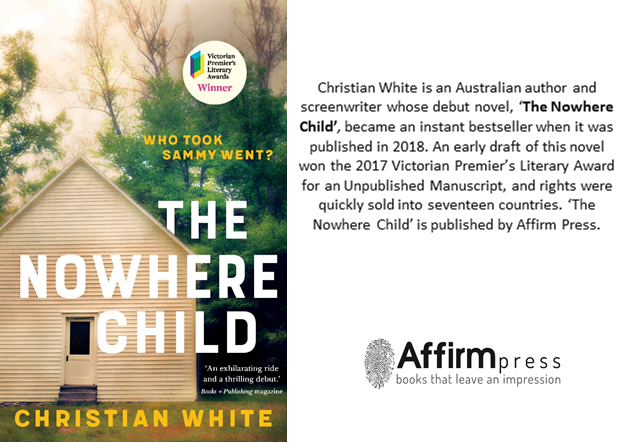 The Nowhere Child by Christian White